WHEN DID ASYLUM START TO GO WRONG ?

What percentage of asylum-claimers are genuine? There's no exact figure but it's believed that between 40% to 50 % of claimants have no genuine claim: they just pretend to do so. That never used to be the case. Asylum used to be small, manageable numbers. Now it's out of control. Where did it all go wrong? Let's look back in time.

Windrush - now there's a name to conjure with. The Windrush generation were thousands of West Indian men and women, who came here looking for work on the buses, as nurses, whatever; in the 50s and 60s when there was a shortage of labour. Like today's migrants they could have 'claimed asylum ' pretending they were 'fleeing persecution', to get the freebie council flat and other help on to the ladder. They didn't. They TOLD THE TRUTH - they were here to look for work and support themselves. Starting with the tiny savings they brought; sharing rented accommodation; working hard. They all spoke good English; they had a Christian background (Protestants from Jamaica, Catholics from St Lucia, etc). So they fitted in and are an inherent component of today's Britain. (These are the immigrants that Enoch Powell got so uptight about in the 1960s).

In the 1970's came a huge wave of Asians from East Africa - expelled by Idi Amin's evil regime. They all had a genuine and obvious asylum claim, we welcomed them in accordingly and they're now part of our society particularly in Southall, Leicester, Slough and other areas.

Sometime between then and now, the notion became widespread that people from the Third World who wanted to come and live here for economic improvement, should pretend to be fleeing persecution even if they weren't - and this would guarantee them entry here for at least 6 months to a year. The beauty of this method was, you didn't even need any connection with Britain (like be from the former colonies). You didn't need to speak or know English, or even have any admiration for our way of life. It would work wherever you came from. You just had to do two things. A. Get onto our shores (even if via France or the rest of Europe). B Say the magic words 'I claim asylum'. Bingo. Open Sesame. You were in, and if you'd broken any laws in the process (like hijacking the odd airliner) - this was ignored by our government.

Why did things change? There are reports that, sometime during the first Blair administration (1997 to 2001), and probably during the Balkan wars, a decision was made by someone up high, to encourage the practice of 'pretend' asylum claims. It's been said this was thought to be a way of, in time, increasing Labour's share of the vote and reducing the Conservative share. It's not clear whether this has happened or if it has, the causes; so a lot is speculation.

In the early 2000's the numbers of illegals increased aided by three technology events: (a) the opening of the Channel Tunnel in 1994, had caused a big increase in lorry traffic and possibilities to stow away, (b) the growth of the Internet which now had dedicated websites to help illegals get in touch with trafficking groups and (c) mobile phone networks extending to Africa and Asia made the journeys easier.

Employers soon noticed there was a big pool of young men, quite happy to work (even illegal work) for lower wages than our indigenous workforce. They weren't too concerned that this might keep wages down for all of us.

Don't get things wrong - almost all of these people are good people, they like it here and want to fit in; they're not criminals; and in many cases are more honest than some of our own. . A very, very small minority of the illegals hate our culture and want to change our society, rather than they change themselves and fit in. And a very TINY minority are actual terrorists; (but unfortunately, in our open society it only takes a tiny few to do a lot of harm and killing; which has happpened ).

MIGRANTS or REFUGEES? Is there a DIFFERENCE ? 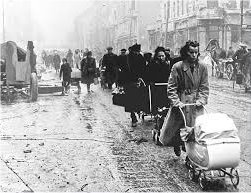 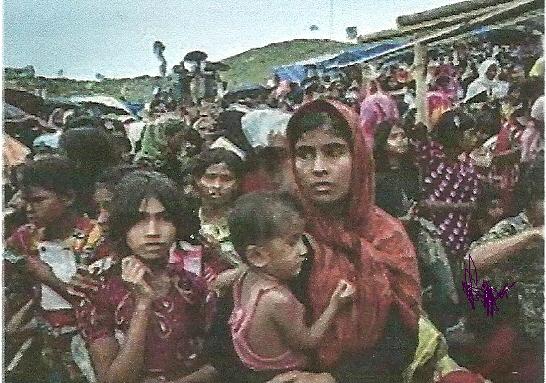 Refugees in 1945, and today. All families. Women with babies and children, a few old men. Not a young man in sight. They're penniless, on foot all their worldly goods in their bags. They've no home to go back to. They don't carry I-phones or money in their pockets to pay traffickers.

These are true refugees and come within the scope of the United Nations definition as eligible to claim asylum .

What about the recent boatloads of young men crossing the channel in the middle of the night ?

These groups seem a bit different. Not a family in sight. All fit young men, I-phones in their pockets. They paid 10,000 Euros each for the crossing .They do have homes to return to. Many of them 'lose' or or destroy their id documentation, making it difficult to establish who they really are. They're from poor countries, they're looking for prosperity in Europe, to better their lives and their families' lives, hoping for a new start in life.

But do they fall within the scope of the UN definition of Refugees - and therefore, entltled to claim asylum without any proof of who they are, with all the associated financial and material support from European governments? Or should they be classed as 'Economic Migrants' - and have to fend for themselves, rather like immigrants to the USA during the 1930s depression ? Should we in Europe, differentiate between the two sets of travellers? And what's the correct label for these all-male groups. Are they 'fake refugees' or just eco-migrants? Is there a correct terminology that's not offensive to some people? Maybe the old-fashioned term 'emigres' is better.

Do we treat and process these two sets of people in the same way? How can we balance being just and compassionate, with protecting our shores and our society? Is it more humane to have 'No Borders' as some pressure groups want - letting any amount of people move from their own country, into other people's countries as and when, without checking their identity or questioning their motives or background, no limits on numbers, no frontier controls?

Migration: we all know what the politicians think.

Mainstream wants to know WHAT THE PUBLIC THINKS. So please tell us what you think, . Join the Conversation now,