Why did the pollsters and the media get the Brexit vote wrong?

The previous year, the pollsters made a cock-up of the 2015 election. They all forecast a hung parliament - no party with a majority. As we know, the Tories achieved a small working majority. So when it came to the 2016 Brexit referendum, all the polling companies and media pundits, spent record amounts of time, and threw record amounts of money, researching the public's opinions of how they would vote.

In fact the 2016 Referendum was the most researched, and most opinion-polled, political event in our history. But they got it wrong - as did all the media. (And the bookies). Even just two weeks before the vote, the outcome seemed to be set for a certain 'Remain' vote. In the very last week, too suddenly for the pollsters to pick up, there was a swing of mood away from Remain to Leave. A small swing, but enough to change the course of history. What caused this change of mind? No-one will ever know for sure where to lay the blame (blame, if you're a remainer that is).

Was it this controversial 'seesaw' poster? This was widely published at the end of May 2016, online and in several newspapers including the mass-circlulation Daily Mirror. This was a poster for the Remain camp. It's controversial because it uses racial profiling. The advert has no words but clearly says "White people are going to vote Leave, if you're Asian or non-white, vote Remain". 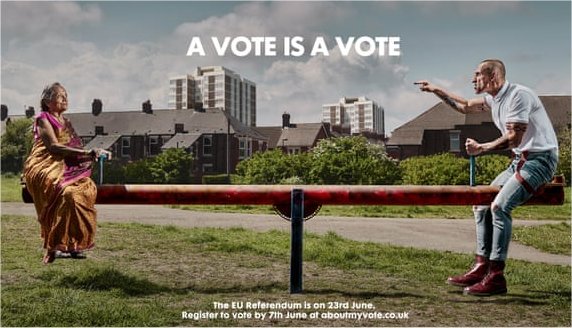 Racial profiling in political ads is controversial. But it's also dangerous - because it can cause the opposite effect from what the advertiser intended.

Is that what happened in June 2016? Some non-whites and Asian voters may have voted 'Remain' after seeing this poster. But did it have the opposite effect on some white voters, who were maybe undecided ?  Did it make them think 'this is telling non-whites to vote Remain, OK then, I'm white, so I'm going to vote Leave ? '

We'll never know if that's what happened, we can only speculate.

Could the WORDING of the referendum ballot have been better?

The wording chosen by David Cameron for the referendum ballot was Remain or Leave. But in the plain English most of us speak, we say 'Stay  in' not 'Remain'. So a choice of 'Stay in the EU' or 'Leave the EU'.

A trivial point maybe? Would a different wording of 'Stay In', have got more votes ? We'll never know - too late to do anything now.

Only an old Etonian like Cameron, would have used the posh word 'Remain' instead of the people's plain English 'Stay In'.